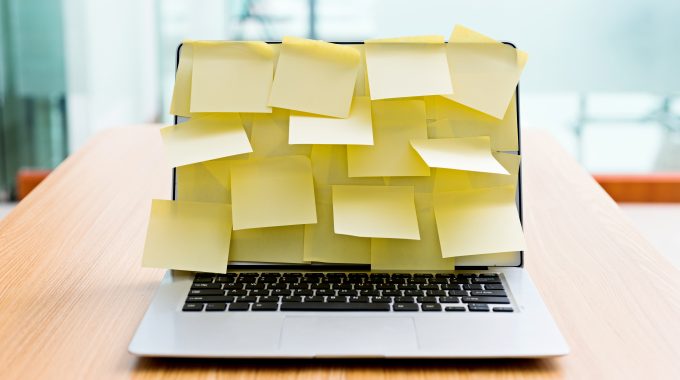 We’re all guilty of it. A small project comes in from your client and they send you a bunch of files as email attachments. You’re crunched for time, so you start working on the project right away and say you’ll worry about filing all those attachments and organizing your files later.

You completed the job, the client was happy, you invoiced the project and moved on to the next project.

A year or so passes. Your client contacts you about updating that small project and it’s needed right away.

Except… you can’t find it.

Minutes, hours, maybe even days are wasted searching your files and combing through emails to find that file your client’s asking you to update.

One thing I have learned in my years as a designer (working in studios of all sizes) is that keeping your files organized and clearly named is a benefit to everyone (including yourself) — and it’s quick and easy to do.

Start with a plan

Begin with building a hierarchical folder structure. It doesn’t have to be complicated, it just has to make sense. Here at Creative Guild, I collaborated with my fellow designers and developers to create a folder structure that worked for the type of projects we work on. 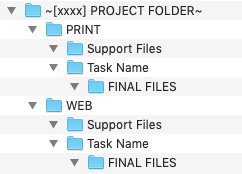 The way this structure works is as follows:

By keeping our files organized in this method, it removes any doubt as to what is the final version of a project.

Search is a powerful tool

Another vital component of organizing your files is to make use of relevant descriptors and docket numbers. Not only does it make it easy to find things quickly and efficiently from a visual point-of-view, it also does wonders for using your operating system’s search functions.

Using the example above, the filename contains the following important information:

To tag or not to tag…

Finally, one last thing to consider for keeping things organized is using tags. Apple’s macOS has built-in support for tags. Check out this brief and well-written article on MacRumors which explains how to use them: https://www.macrumors.com/how-to/files-folders-tags-macos/

One useful function for tags is, for example, to tag your pending or current jobs with an “In Progress” or similarly named tag. Within macOS’s Finder sidebar, you can then view all files or folders that have been tagged with the “In Progress” tag.

It’s a handy built-in function to quickly find your files and folders. Just keep in mind that tags can be quite useful, but should not be a replacement for keeping your files in a hierarchical folder structure.

Setting up a folder structure and naming convention takes very little time and will prove to be very beneficial. Maintaining a consistent, logical folder structure makes it easy to keep things organized. Making sure your filenames are descriptive and relevant also helps in finding files (both with visual searches and computer-assisted searches) and makes them easy to understand. Tagging your files brings additional efficiency and more powerful search results.

If you haven’t been using your own folder and file naming conventions up to now, I encourage you to take a few moments to set them up. Once you’ve completed a few projects using this organization method, it will become second nature and, hopefully, will be of great benefit to you, your team and your clients.